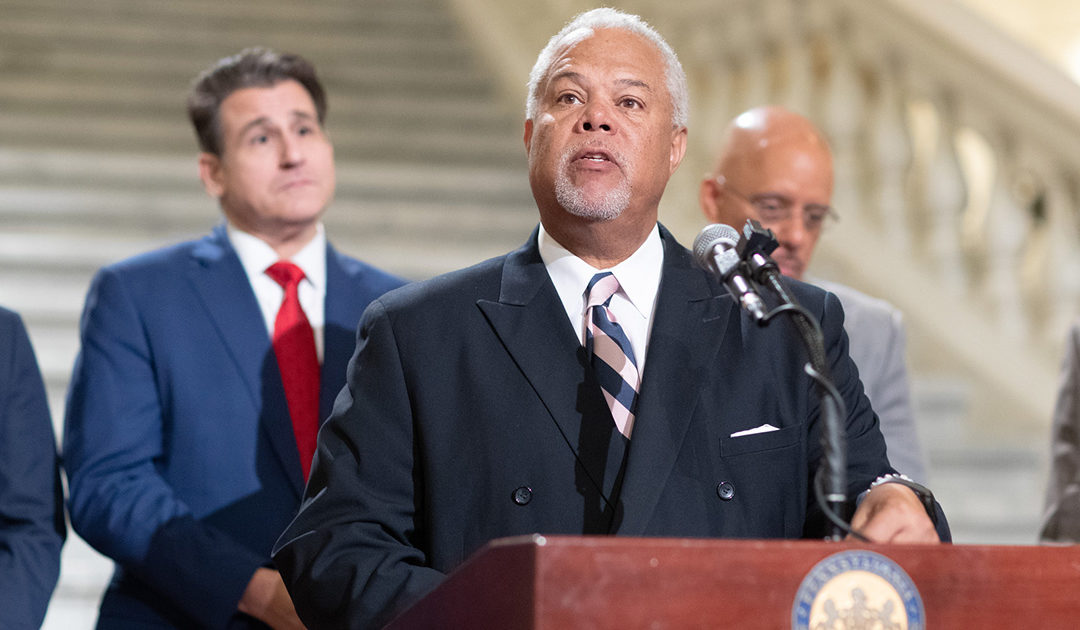 The legislators were joined by a large group of advocates and supporters pushing for automatic voter registration, no excuse absentee voting, same day voter registration and campaign finance reform. Sen. Hughes and Rep. Innamorato are proposing similar bills that would allow those eligible to register to vote when signing up for critical state services such as renewing drivers licenses or applying for a public benefit administered by the state.

“Our democracy depends on its voters, which is why we are fighting to ensure every eligible person has a chance to voice their opinion at the ballot box,” said Sen. Hughes, who is proposing Senate Bill 608. “We have a broad coalition of folks who understand this and are fighting for Pennsylvanians ability to have their voices at the ballot box. Expanding access and simplifying the processes will help do that for our communities across the commonwealth.”

Pennsylvania has 8.6 million registered voters, but less than 55 percent of voting-age citizens turned out in the 2018 midterm elections, with varying reasons impeding participation including work, illness, and other unforeseen circumstances. Research shows higher voter turnout in states that have enacted some or all of the reforms the coalition is seeking.

“Participatory government demands equal access to participation,” said Rep. Innamorato, who has proposed House Bill 1556 on automatic voter registration. “Too often, the complicated registration process we have in place poses a significant obstacle to access to the ballot. Automatic voter registration and our other proposals would make it easier for all Pennsylvanians to have a voice, get informed and be heard. We need to be removing barriers to participation, not erecting new ones. These are the first steps in the fight for a fair, secure democracy in our commonwealth and our communities.”

“If people don’t vote, democracy doesn’t work,” Sen. Fontana said. “If people can’t vote, we are shortchanging our democracy. During the most recent primary election last month, many counties across the state were lucky to have even a 20 percent voter turn-out. It’s obvious we need to find ways to improve voter access and participation and to me, the task is simple. We need to find ways to make voting easier and more accommodating.”

“Introducing an early voting bill is a priority for me because voting should be easier for everyone,” Rep. O’Mara said. “When I was campaigning, I met a young woman named Kate who uses a wheelchair. She told me her polling pace is not ADA accessible, and voting is a big challenge for her. So, one reason I decided to introduce early voting is so people like Kate have the ease and access to practice their constitutional right. It’s about time Pennsylvania steps up to make voting easier for all its eligible citizens.”

“The right to vote is the foundation of our democracy,” Schwank said. “We need to remove needless barriers that keep people from being able to vote or from having their votes counted.”

Rep. Ryan Bizzarro (D-Erie) announced HB 101, which aims to bring same-day voter registration to Pennsylvania while also simplifying the process. His legislation would help increase voter turnout because of increased convenience, while also maintaining integrity in the voting process by not counting same-day registrant votes until the Department of State has verified eligibility.

“The right to vote is the perfect symbol of our democracy,” Rep. Bizzarro said. “Unfortunately, it’s perfect in theory, not in practice. Our outmoded laws – including the one requiring that residents register 30 days in advance of an election to vote in that election – discourage participation by imposing unnecessary hurdles. Our legislation to streamline the process would help fix that.”

Sen. Anthony Williams (D-Philadelphia/Delaware) is proposing shifting ballot positions for candidates running for public office in Philadelphia. The goal of SB 602 is to eliminate the advantages held by candidates who draw first position on the ballot.

“A growing number of Pennsylvanians, especially young voters, are unaffiliated with major parties or uninterested in party politics,” Sen. Williams said. “Those voters still deserve to have a voice in who represents them in city council and the mayor’s office, which is why I’m offering legislation to conduct nonpartisan, ranked-choice voting in the Commonwealth’s largest city, Philadelphia.”