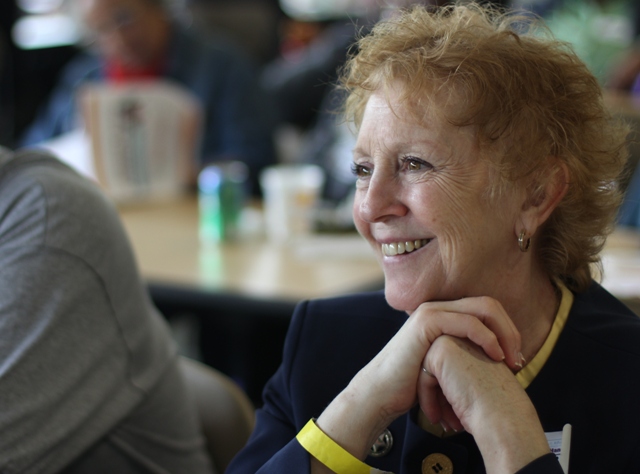 Estella Hyde, president of AARP Pennsylvania, recognizes some of her own story in the keynote address. Hyde is raising her granddaughter. Photo courtesy of The Artist Warehouse.

But people like her can find strength – as well as expertise and advice – in numbers, and it’s why she joined the aunts, uncles, cousins, older siblings and fellow grandparents who converged on the University of the Sciences for the 2011 Helping Hands Intergenerational Resource and Information Conference.

And in those numbers, they can also find a voice to advocate for their cause, said Hyde, president of AARP Pennsylvania. She led a workshop on the topic, one of several offerings at the conference presented by the office of state Sen. Anthony Hardy Williams (D-Philadelphia/Delaware), Turning Points for Children and Grands as Parents.

The event allowed attendees to bolster their knowledge of not just legal, but also educational, financial and behavioral issues connected to raising a younger relative, for the child and caregiver.

“Sometimes, they’re afraid to admit that they are in fact raising a younger relative, because that would mean that there is some problem in the family,” Hyde said. “Sometimes they are embarrassed to move forward. But it is difficult if you stay isolated. When they talk with someone else, they can assist each other and draw strength from each other, even if it’s just emotional strength.”

Elmer Smith, a featured columnist and editorial board member at the Philadelphia Daily News, offered a moving lunchtime address about the sacrifice and appreciation he had for his aunt, who stepped in to raise him after his mother died.

“Facing a host of circumstances, these caregivers willingly step into the breach and do the important job of raising a new generation,” Williams said. “This is not just something that happened way back when. This is a contemporary issue. Even since 2007, there has been a sharp upward trend in the number of children being raised by relatives. We must do a better job of educating and supporting their caregivers.”

According to census data, about 1 in 5 American grandparent caregivers live at or below the poverty line; locally, it’s about 2 in 5. And most of these caregivers struggle disproportionately to tame housing costs, with upwards of a third of their income going to such expenses.

Recognizing this need, Williams helped to organize the conference and is championing caregivers legislatively. His Senate Bill 119, the Intergenerational Family Care Act, assists families in which children are being raised by their grandparents or other generation-skipping older relatives. If enacted, it would address critical needs identified at the conference, such as rental assistance, day-care assistance for working heads of households and development and improvement of intergenerational housing. The bill has bipartisan support and sits in the Public Health and Welfare committee in the state Senate.

Details can be found on his website. AARP is a supporter of the bill.

On average, it costs more than $1,100 every month to care for one child in foster care, according to the state Department of Public Welfare. SB 119 is a cost-effective, socially corrective remedy, Williams said.

“By investing a little in intergenerational families now, we stand to save the Commonwealth millions, while allowing children to grow up in loving and stable family homes that put them on the path to being responsible citizens,” said Williams. “And that’s something we all want.”