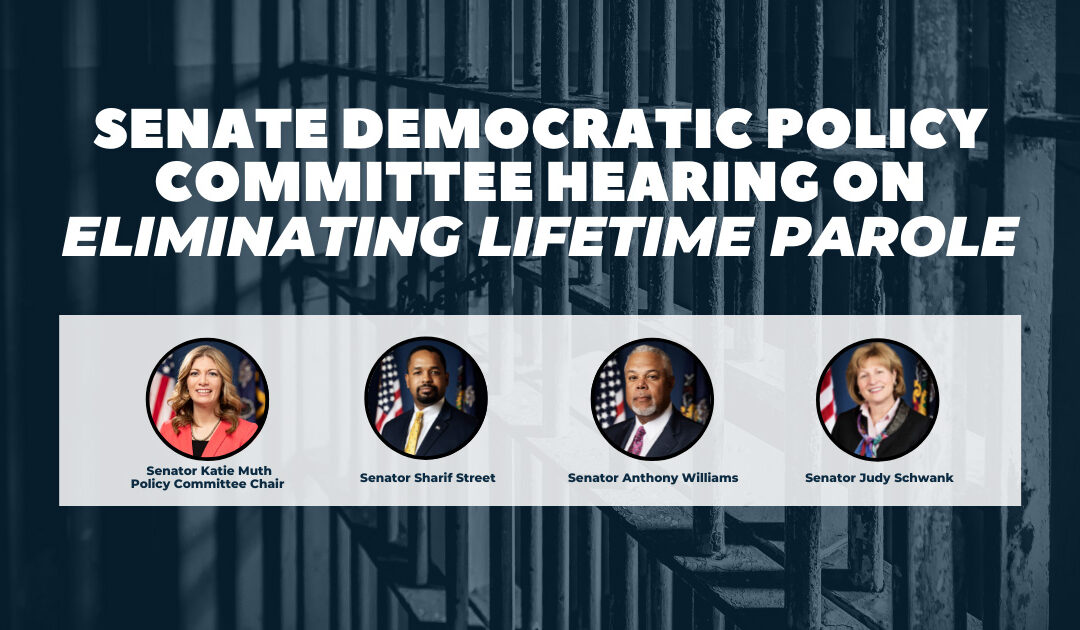 “We are spending far too many resources as a state on tracking down non-violent, technical parole violations instead of focusing our efforts on enhancing and expanding re-entry programs and resources to ensure that those who have served their time have the opportunity to thrive and succeed,” Muth said. “We need to end the ineffective punishment of the prison and parole cycle. The research shows that lifetime parole sentences do not improve public safety or decrease crime.  Our state has both the highest number of people on parole and the highest rate of parole supervision in the country. Pennsylvania taxpayers are paying for this useless mechanism of indefinite control that negatively impacts the lives of people who are trying to establish their lives in a positive and productive way.”

The Senate Democratic Policy Committee heard support from testifiers for drafted legislation that proposes ending lifetime parole sentences in Pennsylvania. The proposed Sunset for Probation and Parole Act would cap parole sentences at six years and allow a pathway for a reduction of that sentence to three years by creating a system to reduce the length of a parole sentence by 30 days for each 30 days the person goes without a parole violation.

“Pennsylvania has too many people under supervision, we lead the nation in this regard. Mass supervision and mass incarceration are inextricably linked. Probation and Parole was intended to reduce the number of people we incarcerate. But given the abuses and how the system has evolved it is now feeding mass incarceration,” Street said. “I appreciate the humanity of today’s testifiers and advocates for presenting ideas around policy to fix this. It is a moral imperative that we not over incarcerate and over supervise. It is also a fiscal imperative that government be good stewards of the taxpayers’ money. Ultimately the people we pay to do this work will have a fuller lives as will those under constant supervision.”

“It is unacceptable that members of our communities, who have served the allotted time for the crimes they were convicted of, go on to face an unending parole sentence upon their release. This does not make our communities safer or reduce recidivism, it does the exact opposite. It allows innocent people to be sent back to jail for technically violating the terms of their parole but committing no additional criminal offenses,” Williams added. “This is not justice, and we must end this systemically unjust practice that results in a costly and undue revolving door from our communities back into the prison system.”

According to a report by Human Rights Watch, Pennsylvania has the highest rate of parole in the nation, and in 2016, more people were sent to state correctional facilities for parole violations than for any other crime.

“Like many states, Pennsylvania hasn’t taken the steps necessary to improve the fairness of our criminal justice system. More and more, people are beginning to realize that locking people up isn’t always the best answer to society’s problems. What we can do is invest in people and provide everyone with an opportunity to right wrongs and live up to their current potential,” Schwank said. “This excellent group of testifiers very powerfully shared how we can go about doing this in Pennsylvania and why it’s important that we take action now.”

According to the Prison Policy Initiative, approximately sixteen states have abolished or curtailed discretionary parole. Most states range from having a system of presumptive parole — when certain conditions are met, release on parole is guaranteed — to having policies and practices that make earning release very difficult.

“The testimony heard this morning throws into sharp relief the onerous and cruel design of the current parole system – a system that is working precisely as designed to extend carceral punishment through invisible shackles,” Megan French-Marcelin, PhD, Campaign Director for Criminal Justice at Color of Change, said. “If we know that more than half of people in state prisons are there on parole violations, we could cut the prison population in half – thus ending family separation and encouraging the socioeconomic stability of families and communities.”

All submitted testimony from today’s hearing and the full video is available at SenatorMuth.com/Policy