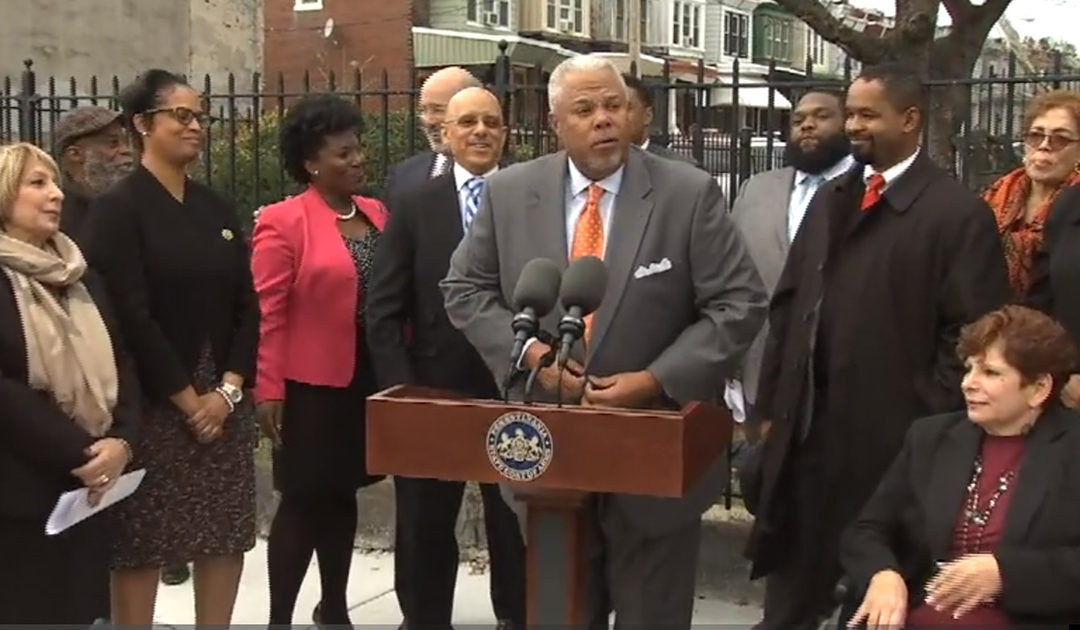 HARRISBURG, October 27, 2020 – State Rep. Stephen Kinsey, chairman of the Pennsylvania Legislative Black Caucus, along with its members and members of the Pennsylvania Police Reform Working Group and the Philadelphia House Delegation, are demanding justice for West Philadelphia resident Walter Wallace Jr., a 27-year-old Black man, who was killed by police on Monday afternoon in the Cobbs Creek section of the city.

Members of these respective legislative bodies also called on the legislature to expeditiously pass the multiple pieces of police reform legislation languishing without action, some of which address procedures on non-lethal de-escalation methods and would instill policies for safer police interactions with residents experiencing mental health crises.

“A mother watched her son, suffering from mental illness, be met with a barrage of bullets before her eyes, and a neighborhood saw the same. A mother and father lost their son, and children have lost their father–generations of one family and an entire community are now forced to bear that trauma for the rest of their lives,” said Kinsey, D-Phila. “Indeed, it’s trauma that we are all forced to bear as we have yet to receive justice for the countless other Black lives killed with impunity at the hands of police. Furthermore, during a time when seeking mental health resources is strongly encouraged, this tragedy reveals that living with mental illness while Black, however, and crying for help is not afforded the luxury of empathy but is instead worthy of execution by police officers.

“We have to do better, which is why I am imploring the legislature to act now! Walter would still be alive if we enacted legislation months ago. It would have provided him access to emergency behavior health relief. For this, we will not grieve in vain,” the PLBC chairman said.

House Democratic Chairwoman Joanna McClinton, D-Phila./Delaware, who represents parts of West Philadelphia and resides blocks away from where the shooting occurred said of the tragedy, “This is not right. Another tragic loss of a young Black man on our Philadelphia streets. Our community grieves with the Wallace family, and looks to the Philadelphia Police Department for answers and demands police reform across the Commonwealth. These officers failed us in a difficult situation where de-escalation policies might have saved the life of Walter Wallace.”

Philadelphia House Delegation Chairman Jason Dawkins, and a member of the Police Reform Working Group, also weighed in saying, “This senseless murder may have occurred in West Philadelphia but rest assured that the eyes of the whole of our city, our state and our nation will be focused on the response by the Philadelphia Police Department. As chairman of the Philadelphia House Delegation and a member of the Police Reform Working Group, I anxiously await the results of a just investigation into this unnecessary shooting of another young Black man on our streets. I hope it will find answers for another mother who has lost a son too soon at the hands of those sworn to protect us.”

Sen. Anthony Williams, D-Phila./ Delaware, whose district includes the Cobbs Creek neighborhood and also resides nearby, expressed heartbreak, and echoed the frustrations and pain of his state lawmaker colleagues.

“Witnessing the killing of another Black man by police was painful, but for it to happen 8 blocks from my home makes me feel like I’m in a horror movie. The confusion of how a 911 call for help to stabilize a person with mental health issues results in his death is crushing,” Williams said. “Like most of my neighbors, I am asking the questions of why weren’t tasers used; why the procedure of blocking off the area and calling in a mental health expert wasn’t employed; why weren’t African American officers present in a community of African Americans to try to deescalate the situation; and why the mother’s pleas to understand that her son had mental challenges not heard.

“I listened all night to the frustration, pain, tears, anger and confusion of my friends and neighbors. Be clear we respect the investigation that will have to occur, but we want immediate action as it relates to procedures that broke down and policies that protect bad policing. We also want to be clear we are a hardworking, peaceful community; those that have an agenda of destruction and looting we do NOT support.

“I can’t provide the words to explain the stain that this will leave. I can only remind you that only a few blocks away a bomb was dropped on our neighborhood. We have not completed that healing and now another bomb has been dropped. We are devastated,” he said.

The lawmakers said they are closely monitoring updates from the Philadelphia District Attorney’s Office and the DOA Special Investigations Unit who is currently investigating.