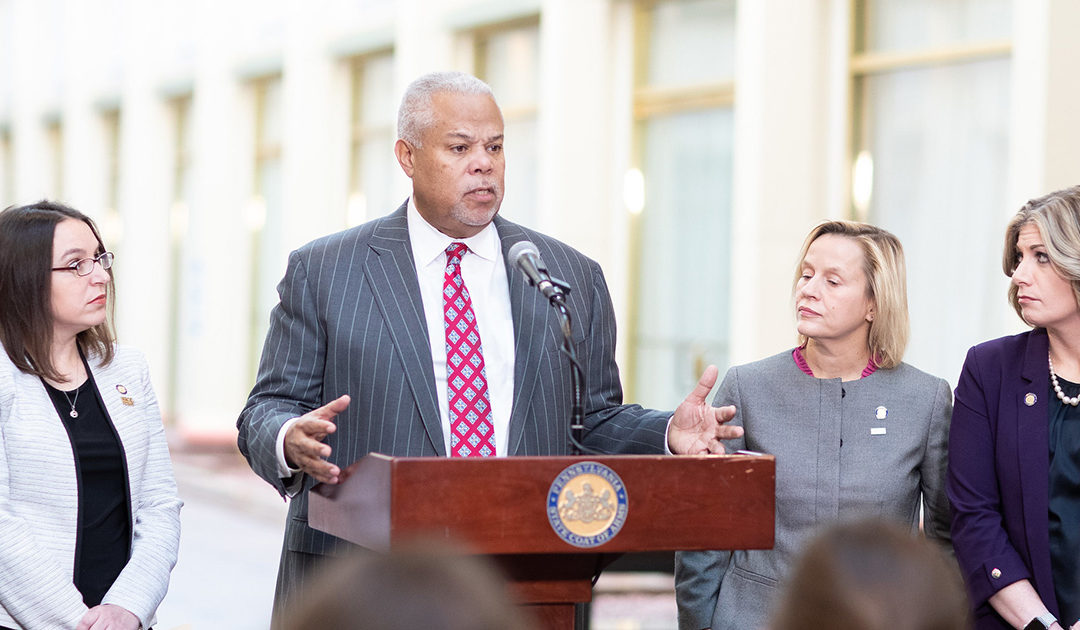 Harrisburg, Pa. − December 18, 2019 − Today, Senators Anthony H. Williams (D – Delaware, Philadelphia), Lindsey M. Williams (D – Allegheny), Maria Collett (D – Bucks, Montgomery), and Katie Muth (D – Chester, Montgomery, Berks) introduced Senate Bill 978, which provides greater transparency and opportunity for public input to the process by which the Governor nominates candidates to fill vacancies in the judiciary. The four Democratic prime sponsors of the bill were joined by members of the Senate Democratic Caucus and Maida Milone of Pennsylvanians for Modern Courts at a press conference today in the East Wing Rotunda for the announcement.

Under SB978, the Office of General Counsel would be required to solicit applications upon the occurrence of a vacancy. Following the close of this application period, OGC would then make all application materials publicly available on their website for public review and comment for at least 30 days. During this 30-day public comment period, the Governor would not be permitted to make an appointment. Any comments received would be given to the majority and minority chairs of the committee handling the nomination. Additionally, a public, televised confirmation hearing with equal time reserved for questions from the minority and majority will be required for any nominee to a state-level court. Notwithstanding these changes, the Governor continues to retain his or her own judgment in nominating an individual to fill a judicial vacancy.

“Being a judge is one of the most important roles in our society, one which entails a great deal of trust from the public,” Senator Anthony Williams said. “The best way to ensure the public’s trust in a judge’s impartiality is to include the voices of citizens – particularly citizens of color and from low-income backgrounds – in the selection process. The goal of this bill is to improve the public’s trust in our judicial branch by shedding light on the process by which those judges are nominated and confirmed.”

“Our judicial system needs to be fair,” said Senator Lindsey Williams. “We have chosen to elect judges in Pennsylvania because we value public input and vetting of these public officials to encourage trust in the institution of the judiciary. The public deserves the same level of transparency when the State Senate appoints judges. The legislation we are introducing today will make the nomination process more public. Our judicial nominees should not be chosen in smoke-filled backroom deals, but in the light of day for all to see.”

Senator Collett added, “Pennsylvanians deserve more – not less – transparency in their government.  This judicial nomination reform bill is imperative as backroom deals that evade public scrutiny and accountability continue to persist. By standardizing and publishing the application materials of potential nominees, we will ensure that no one is appointed to the bench without an opportunity for the public to provide critical feedback to legislators. Good government demands vigilance from the public, and this bill delivers the information they need to participate in our democracy.”

“Transparency is a requirement for maintaining public trust in our government, especially our judicial system,” said Senator Muth. “Becoming a judge should involve a thorough evaluation of merit and ethics. It should not be based on who you know or backdoor deals and favors. Transparency requires public access to information about the judicial selection process, including rationale for published decisions, potential conflicts of interest, assets, and mandatory public hearings with public input.  As elected officials, we should work with urgency to update our laws to ensure accountability and strengthen our democracy.”